Fluxus on the street 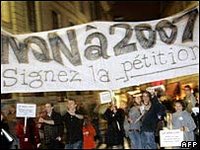 French marchers say 'non' to 2007
Demonstration against 2007 in Nantes

Demonstrators in the western city of Nantes waved banners reading: "No to 2007" and "Now is better!" The marchers called on governments and the UN to stop time's "mad race" and declare a moratorium on the future.

Compare and contrast this action to Ken Friedman's silly "In one year and out the other" script.

That's what I'm talking about!

Only France could produce Descartes, Derrida and Baudrillard ...and also these guys.