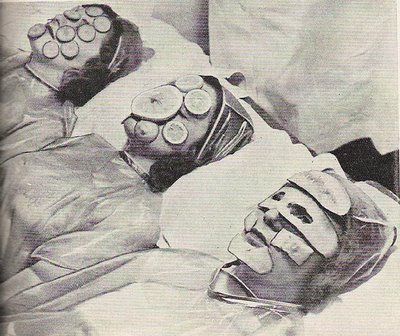 Some chinese fishermen were astounded when their boat crashed into an iceberg in Antartica and three deep frozen aliens slid onto the deck from a crack in the iceberg's side! They were kept in the hold with 20 tons of halibut until they landed three weeks later in Hi Pong. Scientists believe they may have been explorers from another planet who came here millions of years ago and somehow got frozen into the ice. No sign of any space ship was found but teams of boy scouts have gone back to the Antarctic to look for signs and to fill matchboxes with a hundred different things.
The aliens have shown no signs of life but are in a remarkable state of preservation. They are being kept under close scrutiny at the Institute for Otherworlds in Fung Tang. A spokesperson said " We have been studying the facial protusions and made a trifle".
Posted by Wastedpapiers at 7:24 AM