To Port, To Starboard

Posted by State of Being at 1:35 PM No comments: 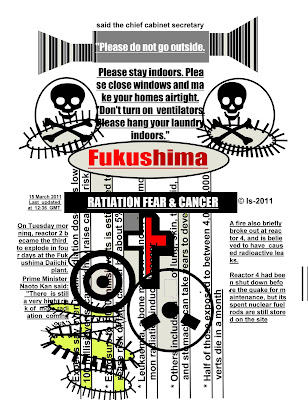 He told residents: "Please do not go outside. Please stay indoors. Please close windows and make your homes airtight.
...
"Don't turn on ventilators. Please hang your laundry indoors."
The crisis has been prompted by last Friday's 9.0-magnitude quake and tsunami in north-eastern Japan.

On Tuesday morning, reactor 2 became the third to explode in four days at the Fukushima Daiichi plant.

A fire also briefly broke out at reactor 4, and is believed to have caused radioactive leaks.

Reactor 4 had been shut down before the quake for maintenance, but its spent nuclear fuel rods are still stored on the site.

Chief Cabinet Secretary Yukio Edano said they were closely watching the remaining two reactors at the plant, five and six, as they had begun overheating slightly.

He said cooling seawater was being pumped into reactors one and three - which were returning to normal - and into reactor two, which remained unstable
Japan also announced a 30-km no-fly zone around the plant to prevent planes spreading the radiation further afield.

After Tuesday's blast, radiation dosages of up to 400 millisieverts per hour were recorded at the site
.In a televised address, Prime Minister Naoto Kan said: "There is still a very high risk of more radiation coming out."
RADIATION AND CANCER
* Experts say even small radiation doses, as low as 100 millisieverts, can slightly raise cancer risk
* Exposure to 1,000 millisieverts is estimated to increase risk of fatal cancer by about 5%
* Leukaemia, a bone marrow cancer, is the most common radiation-induced cancer
* Others include cancer of lung, skin, thyroid, breast and stomach; can take years to develop
* Half of those exposed to between 4,000-5,000 millisiverts die in a month
http://www.bbc.co.uk/news/world-12740843
-visual poem by Litsa Spathi
Posted by Litsa Spathi / Nobody at 1:20 PM 1 comment: