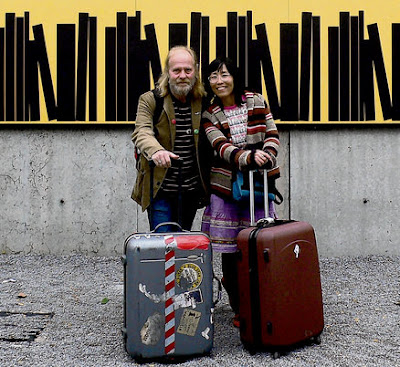 An Achill cottage industry
BOOKS: Achill Island seems an unlikely base for a Belgian and South Korean book artist duo, yet that’s where Franticham decided to set up. ANDY DEVANE finds out what drew them there

WHEN BELGIAN book artist Francis Van Maele first laid eyes on an abandoned cottage on Achill Island in the mid-1990s, he was entranced. Situated in Dugort village, in the shadow of Slievemore mountain, the cottage was just metres from the Atlantic. In 2005, after becoming the cottage’s owner, he set up home there and established Red Fox Press, a printing studio in which he creates his own limited-edition books.

That same year, while exhibiting at a book fair in Seoul, Van Maele asked if he could sit next to South Korean artist Antic-Ham at a sushi bar. It was to be the beginning of an artistic journey that would shape both their lives and careers. Over the summer the pair created what was to be the first of many books together, Night in Seoul. When it came time to say goodbye, they decided to make collage “diaries of separation” – started by one in Achill and finished by the other in Asia.

That winter they spent a month in London, where they combined romance with an intense artistic collaboration. It was then that they decided to merge their artistic identities and work as one unit, and so Francis and Antic-Ham became Franticham.

Mirroring the visual poetry of her books, Antic-Ham speaks in deep, poetic terms. When first separated from Van Maele, she had a sudden urge to go to the coast, and although the East China Sea is quite a distance from Blacksod Bay, she imagined that if she were a fish she could swim, somehow, all the way to Achill Island. Since then the fish motif has become prevalent in their collaborative work.

Antic-Ham was born in Seoul in 1974, and she divides her time between South Korea and Achill, spending about seven months a year in the latter. She is highly focused on her work, and insists that although love is the most important thing in her life, work is of equal importance.

Van Maele was born near Bruges in 1947, and ran a successful publishing house in Luxembourg before moving to Ireland. Although silk-screen printing is a labour- intensive process, he makes it sound almost effortless. “You can print on anything: paper, cardboard, boxes. You can print text, simple images and very elaborate art work. You just need a good table, hinges, a few screens and colours. All the printing is done here in Dugort.”

Given their remote location, the couple’s level of self-sufficiency in the production of such specialised work is remarkable. As Van Maele explains, “smaller books are laser-printed or inkjet-printed in our conservatory, and all bookbinding is done here as well. We use about 20 different kinds of papers, depending on projects, and we order them in the UK and Luxembourg or send them from South Korea.”

“Most of our books are limited editions and most of our collectors are in the US, then the UK, Europe and Australia. We make less than 1 per cent of our sales in Ireland.”

Van Maele is bemused to see his early work sell at auctions on the continent for 10 times its original sale price.

The couple travels to about 10 book fairs a year in cities such as London, Paris, New York and Frankfurt. They describe the fairs as essential for meeting collectors and librarians, who represent the bulk of their business, and although they enjoy visiting big cities, they are always happy to return to their adopted Achill.

The island’s rugged beauty and Atlantic air appear to fuel their creative energy. “I can’t imagine living in any other place,” says Van Maele, adding that one advantage of living on Achill is having plenty of time to work undisturbed. Despite this, the couple open their studio every summer, although Van Maele notes wryly that “as the signs do not say ‘coffee shop’ or ‘craft shop’, people coming in are already filtered”.

Canadian filmmaker Heather Fletcher met the pair in London in 2005. “Being a hopeless romantic, I was enraptured with their story,” she says. The next year she flew to Ireland to make a short film of the Franticham story. Over four days, which she describes as a “magical experience”, Fletcher produced Lost Seouls – Diary of Two Fish , a touching 14-minute film of Franticham’s life and work.

Like exotic birds swept off course, this colourful couple cut a dash as they stroll along Dugort’s Golden Strand. Van Maele says: “I think we are very fortunate to combine life and work. We’re on the exact same wavelength, and we enjoy it fully.”

See redfoxpress.com. Heather Fletcher’s film Lost Seouls – Diary of Two Fish is on YouTube
Posted by Litsa Spathi / Nobody at 3:58 AM No comments: